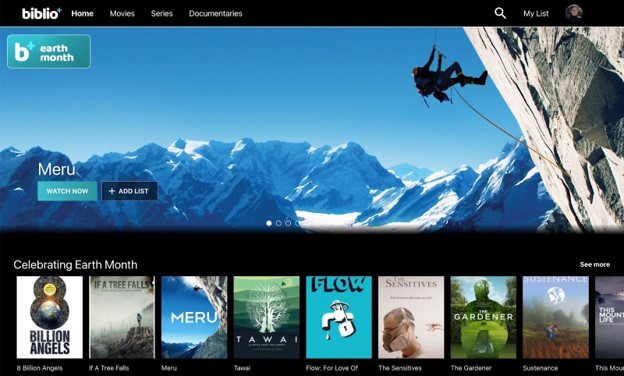 Celebrated globally in April, Earth Month encourages action and participation in initiatives that focus on the urgent need for environmental protection and climate solutions, and promotes initiatives to create awareness for environmental conservation. By taking part in this celebration, this month on biblio+ we’re featuring program initiatives celebrating: Earth Day, Conservation & Sustainability and Global Stories. Explore some of our other programming highlights, including:

Are there too many of us for planet Earth? 8 BILLION ANGELS exposes the truth about the conflict between the size of our global population and the sustainability of our planet, inspiring real solutions for environmental and human health.

Read more
IF A TREE FALLS

IF A TREE FALLS: A STORY OF THE EARTH LIBERATION FRONT is the remarkable story of the group’s rise and fall, told through the transformation and radicalization of one of its members, Daniel McGowan. From Academy Award® winning director Marshall Curry.

I AM BIG BIRD

An affectionate portrait of Caroll Spinney, the beloved puppeteer responsible for creating worldwide icons out of Sesame Street’s Big Bird and Oscar the Grouch for the last 45 years.

THE GIRL WITH THE DRAGON TATTOO

Under the Metropolitan Library lies a group dedicated to protecting the world from a secret, magical reality.

Admitted to a rehabilitation center after a serious ski accident, Tony becomes dependent on the medical staff and pain relievers while looking back on a turbulent relationship she experienced with megalomaniac Georgio.

Robin’s Wish is the final word in the story of what really happened to Robin Williams at the end of his life, it reveals the beauty and power behind the mind of one of the greatest entertainers of all time.

James Franco stars as the young Allen Ginsberg – poet, counter-culture adventurer and chronicler of the Beat Generation. In his famously confessional style, Ginsberg recounts the road trips, love affairs and search for personal liberation that led to the most timeless and electrifying work of his career, the poem HOWL. Meanwhile, in a San Francisco courtroom, HOWL is on trial. Prosecutor Ralph McIntosh (David Strathairn) sets out to prove that the book should be banned, while suave defense attorney Jake Ehrlich (Jon Hamm) argues fervently for freedom of speech and creative expression. The proceedings veer from the comically absurd to the passionate as a host of unusual witnesses (Jeff Daniels, Mary-Louise Parker, Treat Williams, Alesssandro Nivola) pit generation against generation and art against fear in front of conservative Judge Clayton Horn (Bob Balaban).

THE BOOK OF LOVE

To fulfill a promise he made to his late wife, an introverted architect pursues an unlikely friendship with an independent teenage girl. Together, they help each other overcome loss and embark on an incredible adventure to do the impossible.

Starring Cynthia Nixon (‘Sex and the City’) and Keith Carradine.

Are there too many of us for planet Earth? 8 BILLION ANGELS exposes the truth about the conflict between the size of our global population and the sustainability of our planet, inspiring real solutions for environmental and human health.
Now available on biblio+.
watch video