Ventura County desperately needed a branch on the east side of town, but the budget only allowed for 24 open hours – far fewer than those required by the busy community.

Hill Road is now open 60 hours a week and saw a 78% increase in library use in just three months. Ventura County Public Library has since won two library innovation awards for the implementation of open+.

open+ enables new branch to provide something for everyone

There was a determined need to provide library services on the east side of the City of Ventura for several years. Residents have been vocal about this need for a community library and Ventura County has been diligently seeking ways to fill that need. The wait paid off in December 2017, when the brand-new Hill Road library was opened to the public in this community.

The 5,100 square foot library was designed to be flexible from the get-go. All of the furniture and shelving sits on castors, allowing the space to be rearranged to function as classrooms, presentation areas, and a maker space, in addition to housing a collection of physical and digital titles.

“We’re a pretty non-traditional little library,” says Molly Krill, Youth Services Manager. “We serve a lot of families, and there are 7 schools within a two-mile radius, so we are very active. We consider ourselves more like a community centre than a traditional library.”

Though the community was thrilled to finally have a neighbourhood branch, budget restrictions still made library access difficult for many. Originally, the budget would have only allowed the library to be open for 24 hours a week. Though this was increased to 40 hours a week by the time the library officially opened, it still wasn’t enough for Nancy Schram, Ventura’s Library Director.

“We knew this was going to be a very popular, busy library because community members had been telling us for years how much they needed library services on the east side of Ventura. We wanted to find a way to provide access to the library when it was convenient for patrons, but we only had enough funding for 40 staffed hours. I went looking for a solution, and when I found Bibliotheca’s open+, I knew it was perfect for our system,” she says.

open+ is a comprehensive solution that allows libraries to control access, security, and activity within libraries during unstaffed hours. The system integrates with libraries’ existing ILS and self-check solutions and allows announcements, lighting, and other physical library needs to be controlled from one centrally managed hub.

“Our strategic goals were simple: we wanted to empower patrons to use self-services and provide them with as much access to library services as possible. We have a unique library in that we already provide a lot of self-service options so our goal was to enable patrons to use those services even when we couldn’t have staff here,” says Schram.

Schram contacted Bibliotheca about open+ and was surprised to discover that Ventura County would be only the second North American installation of the open library solution. Though open+ has been used in over 850 libraries in Europe, where it has been on the market for a decade, the solution didn’t make its way to North America until 2017.

Even though the solution was new to the North American market, after looking at alternative options, Schram was convinced that open+ was the way to go.

Ventura County decided to offer open+ hours 6 days a week from 8 am to 10 am before staffed hours began at the branch. Schram was surprised by how open community groups and library stakeholders were to the idea.

“I expected more resistance and more fear, but I was very surprised that people were very excited about the idea and positive about it,” she says.

Understandably, several staff members were cautious. They were concerned about theft, vandalism, and overall security. They also worried that having patrons in the library during the hours that library staff was preparing for the day would be distracting and uncomfortable for staff and users alike.

“Seniors come in and read the newspaper. People who are working on research or doing more scholarly work come in and check out a laptop during that quiet time.” Molly Krill, MLIS Youth Services Manager

To address these concerns, library leadership led many discussions with staff and stakeholders before open+ was implemented – brainstorming obstacles, challenges, and potential solutions. They decided to require an orientation for patrons as a prerequisite for using the library during open access hours. The brief orientation not only explains how to access the building during open hours but also outlines appropriate use and the library code of conduct.

As a result, Hill Road branch has not had a single security problem since implementing open+.

Every week, the Hill Road branch offers an early literacy class that serves 40-85 children. They also host a Makers’ Lab, a chess club, a Harry Potter club, and numerous adult activities including a Veteran’s book club.

Because the branch is so active during regular hours, community members appreciate the quiet early morning access provided by open+.

Krill says, “Seniors come in and read the newspaper. People who are working on research or doing more scholarly work come in and check out a laptop during that quiet time. Often moms who have children of multiple ages drop their older kids off at school and come in during open+ hours to have quiet play with their kids. In the early morning hours, there aren’t a lot of other kids to share toys with, and they have an opportunity to relax and have close time with their small children.”

“Our strategic goals were simple: we wanted to empower patrons to use self-services and provide them with as much access to library services as possible. We have a unique library in that we already provide a lot of self-service options so our goal was to enable patrons to use those services even when we couldn’t have staff here.” -Nancy Schram, Director

The library car park is shared with the Social Security office, other businesses, and a café, so often, patrons happen upon the branch by accident. However, once they’ve made the discovery, they often become regular users. One such user was a ghostwriter who used open+ hours to finish his novel. He would come in during early access hours to write in the quiet and then stay into regular staffed hours to get help with research and chat with the staff.

“We really became friends with him. He would tell us how he was doing on the book, sometimes ask for help. It’s such a nice community in that way, we get to know our customers really well,” says Krill.

The new Hill Road branch is now accessible 60 hours a week, offering both extensive programming and plenty of quiet. That extended access is being well used by the community, between February and April of 2018 the branch saw its usage rise by 78%.

The Hill Road Library had some unique design challenges to handle when it comes to using automated technology for access to the space. Unlike free-standing branches, Hill Road shares restrooms with an adjoining café. The door to get back into the library space has an open+ access panel, for security reasons. If patrons forgot to take their library card with them to the toilets, they would need someone to let them back into the library section of the building.

Being one of the first few open+ libraries in North America, Ventura County Library worked with Bibliotheca as an early adopter to help set the direction for this technology and platform throughout the country. They gave valuable insight into what the community needed and any challenges to be aware of when it came to implementing open+ in North America.

“We’ve been so impressed with how flexible the community has been and how understanding they are that this is a new system. As with any technology, there are always a few small kinks to work through. They understand they are a part of the process of solving those problems with us. They are giving us their help and input in a very positive and constructive way,” Schram says.

She also says that the Bibliotheca team was instrumental in easing the burden of being an early adopter.

“Bibliotheca has been great to work with. They’ve been very responsive from day one. They worked with us through the challenges that came up, and never said that it was something they couldn’t do, but instead said, ‘Let us figure it out.’ From the people at the very top all the way through the chain of command, they’ve been proactive in helping us implement and market the system to our community members.”

For libraries considering implementing open+, Schram says communicating with community members, staff, and city and county officials is critical. Ventura County is heavily unionised, so Schram reached out to the union to make sure they understood that open+ was not going to replace staff jobs, but simply offer access that otherwise would be unavailable.

She says the communication shouldn’t end once the system is implemented but should continue as the rewards are realised.

“Share the real-life stories of how people have used the service and how it’s really made a difference in their lives. We have examples of parents with young children who weren’t able to use the library before we had open+, examples of people dropping by before their work hours to pick up their holds. The true stories let everyone see that open+ is making a real difference in the community and the level of access we can provide to library services – which is really what we all want at the end of the day.”

“We’re a pretty non-traditional little library. We serve a lot of families, and there are 7 schools within a two-mile radius, so we are very active. We consider ourselves more like a community center than a traditional library.”

“We knew this was going to be a very popular, busy library because community members had been telling us for years how much they needed library services on the east side of Ventura. We wanted to find a way to provide access to the library when it was convenient for patrons, but we only had enough funding for 40 staffed hours. I went looking for a solution, and when I found Bibliotheca’s open+, I knew it was perfect for our system.” 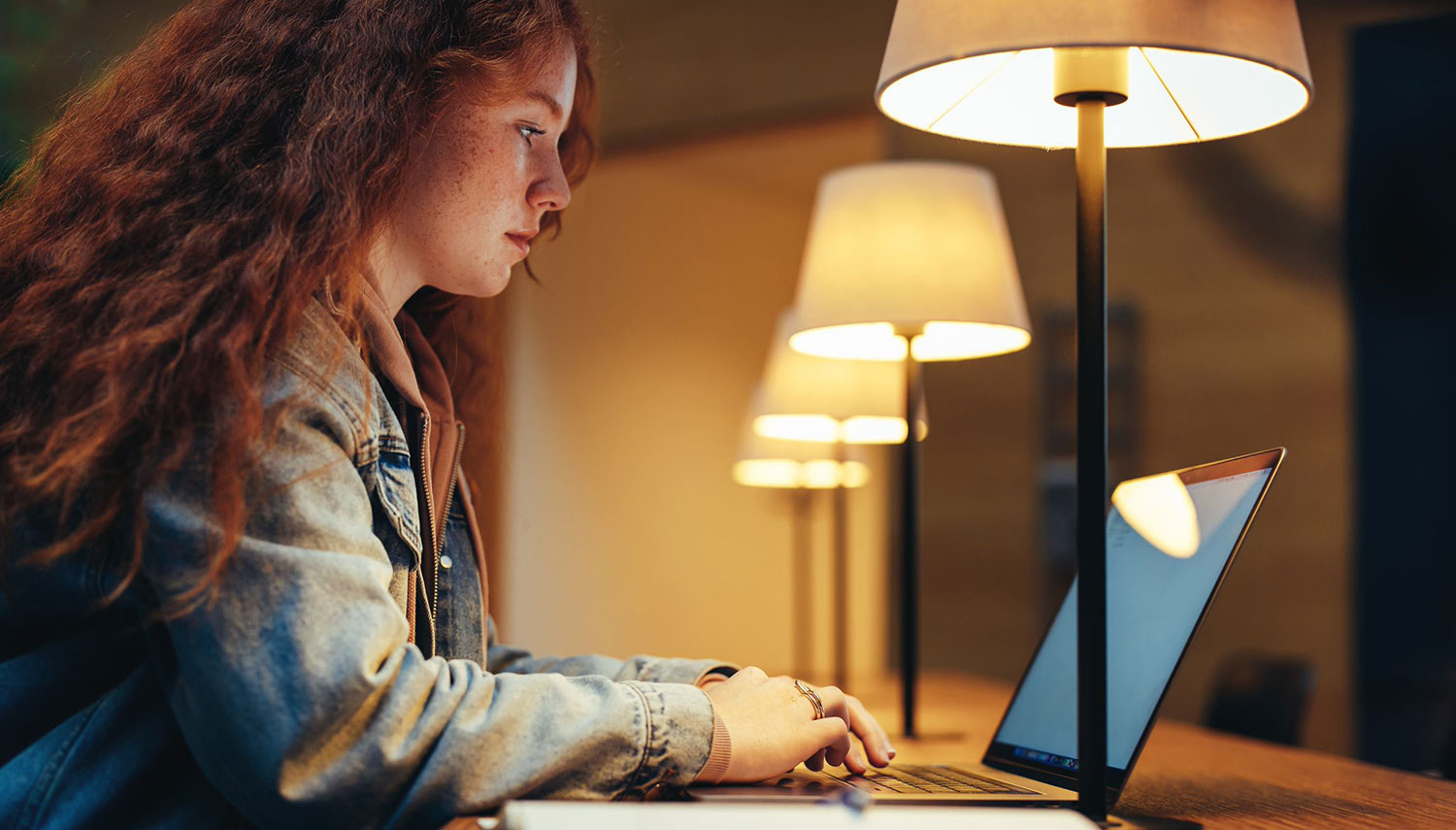 Using open+, libraries of all sizes can extend open hours beyond staffed hours to provide Extended access to more members of the community.